Edmontonians own 100% of EPCOR. As the sole shareholder each and every dollar that is paid to EPCOR Directors and Senior Executives are dollars that cannot be returned to the City of Edmonton to pay for much-needed public services. Instead of commissioning studies to find what we can cut to save a few million dollars we should be looking at places we can get it without eliminating services we all rely on.

In 1902, the City of Edmonton bought the 10 year old private electricity company that had power running down Jasper avenue. The governance of the publicly owned utility was given over to private interests with the City of Edmonton as the sole shareholder, effectively operating as a municipal crown corporation. Since then they have acquired other services, many of which were given to them to manage from the City itself.

Throughout the course of the election we heard loud and clear that the privatization of city services results in at best equal service at greater cost and more commonly worse service with less accountability and oversight. A great example of this is the overall pay package of EPCOR’s CEO and Board being WAY out of line to similar public entities. 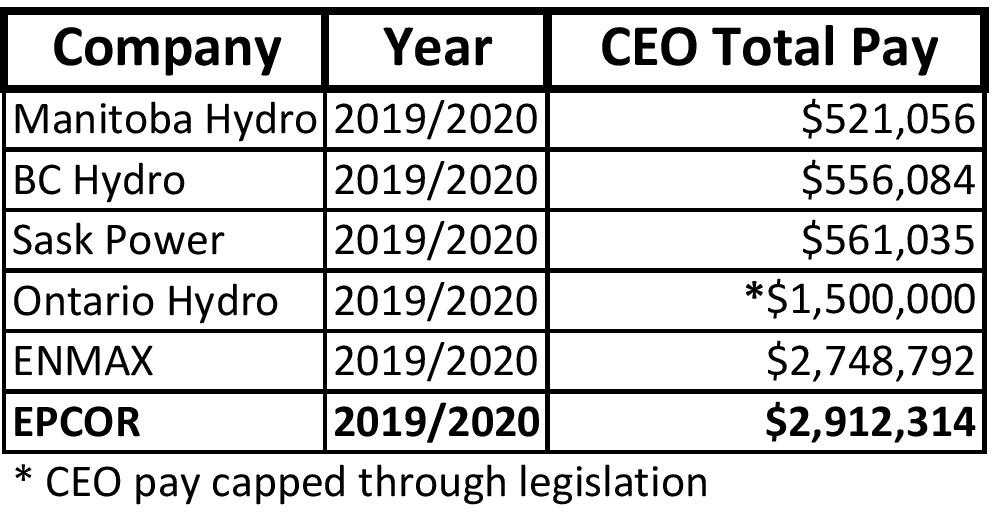 This combined with the fact that many board members at EPCOR make more than $100,000 a year, it is clear that this organization is spending far more than needed to compensate their decision making bodies. This money comes from the pockets of hard working families in Edmonton and shouldn’t be going to line the pockets of the ultra wealthy.

We call on the City as the sole shareholder of EPCOR to rein in excessive executive compensation and ensure that Edmontonians get the services they deserve at a price that is reasonable.